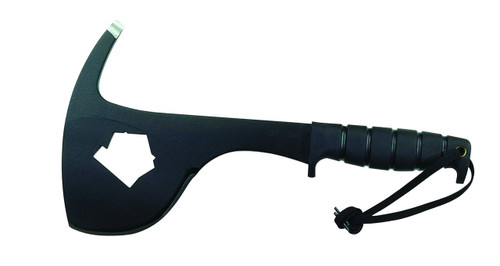 The Ontario SP16 SPAX knife is where knife meets axe and is designed as a breaching tool with about 13" in overall length. The SP16 Knife can be used for a variety of tasks including use of the center hole for opening and closing fire hydrants and gas valves. The SP16 SPAX features full tang construction with a whopping 1/4" thick blade, which is coated with a black epoxy powder coat. A hole in the butt cap allows for a lanyard and both the sharpened 5.2" rounded knife blade and "pick" on the opposite side will perform an array of chopping, cutting and hacking duties. SP16 SPAX comes with a leather/cordura nylon sheath. The Ontario SP16 SPAX Knife is made in the USA and has an national stock number for sale to the US Military.

SPAX NOTES: When backordered, the SP36 can serve as a substitute for the SP16; The SP36 is identical to the SP16 with one exception. The SP36 has a small hole near the top of the blade. The price for the SP36 and the SP16 is the same. The SP36 is labeled as such, but also has SP16 etched on it as well. If you would like to order the SP36 or substitute a backordered SP16, just enter it in the comments when you place your order or call 318-655-2393.